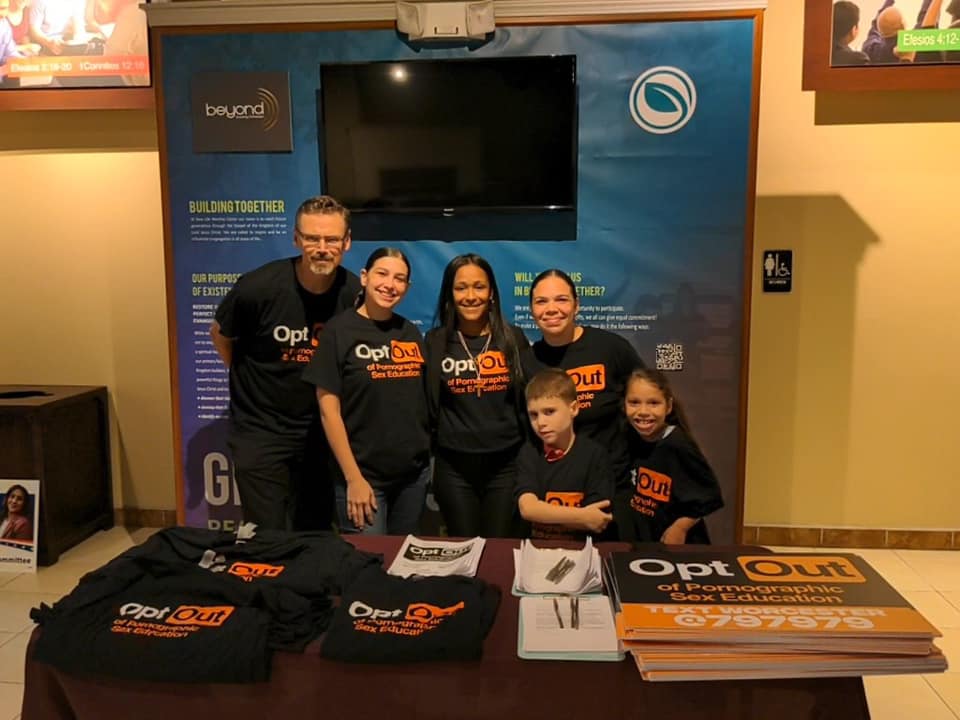 Be encouraged! You are not alone, even in Massachusetts! Many people share our common desire to preserve and protect religious liberty, the sanctity of life, and the family in the Commonwealth.

This was clearly witnessed this past Wednesday evening when Massachusetts Family Institute sponsored the CELEBRATE with MFI! event in Worcester, hosted by Centro de Adoracion Vida Nueva. More than 200 people listened to pastors and parents testify about the effective work they have been able to accomplish with the help of MFI. Read the exciting stories below.

Defending Religious Liberty
Pastor Luis Morales from Vida Real Church in Medford recounted his recent experience and how MFI worked alongside him to protect religious liberty. Incredibly, during their Sunday morning service, a representative from the local board of health walked down the center aisle of his sanctuary, unannounced, and demanded he put on a mask while preaching. Furthermore, this bureaucrat was accompanied by seven police officers! MFI was contacted and quickly provided three attorneys. Two of them immediately flew in from Virginia and Texas, and the third attorney was our own MFI General Counsel and President Andrew Beckwith. Pastor Morales commented on how he felt better represented than the City of Medford! Ultimately, the city council and board of health backed off, and even apologized to Pastor Morales and Vida Real for violating their religious liberty.

Protecting Parental Rights
Two parents from Worcester testified about their efforts to create an Opt Out campaign encouraging parents to exempt their children from the explicit, pornographic sex education curriculum recently adopted by the Worcester school committee. We expect the incredible work of these parents, helped by MFI, to be the most effective Opt Out effort in the history of Massachusetts! Once this campaign is successful in Worcester, the second largest city in New England, we believe other parents will be able to replicate the same action in any school district where comprehensive sexuality education is taught.

Creating Educational Solutions
Options for affordable and quality Christian education are increasing in the state. Pastor Adam Rondeau from ViewPoint Christian Academy in Southbridge shared how a growing number of churches are starting new schools and mentioned two in particular opening soon in Chicopee and Peabody. Last night’s host of CELEBRATE with MFI! is looking forward to partnering with Pastor Rondeau to start a school at their church as well. Bread of Life Church in Westminster started a school in 2020 and it grew from three to twelve families their first year. This year they are adding five more families! MFI has been active behind the scenes cooperating with Pastor Rondeau and others helping numerous churches find the resources necessary to open new schools. If your church is interested in learning more about establishing a school contact Michael King, michael@mafamily.org.

Baystaters are Standing Up for Faith, Family, and Freedom
Michael King, the MFI Director of Community Alliances, also described the great show of support at a recent hearing where the removal of the religious exemption for mandated vaccines was being considered. Of the more than 400 people who attended the hearing, about 90% were there to protect the religious exemption. In further encouraging news, Michael mentioned the recent Ashby, Townsend, and Pepperell school committee meeting in which 92% of parents in attendance testified against critical race theory! The swell of Massachusetts’ citizens standing up to protect their freedoms is growing and MFI is consistently there to provide support.

The evening of celebration ended with Michael inviting people to join the growing referendum movement of more than 1,000 volunteers in collecting signatures to repeal the dreadful new state abortion law that allows born alive babies to die with no legal accountability for medical care. We want to give Massachusetts’ voters the opportunity to repeal this law at the ballot box in 2022. If you would like to join these volunteers, click here to sign up now.

In 30 years of advocacy, last year was one of MFI’s most effective! Hundreds of local churches from many different communities, languages, and cultures looked to MFI as a trusted ally in the fight to defend religious liberty and protect parental rights. Our increased effectiveness was due to the support of both citizens and churches that blessed MFI’s small staff with an increase in donations… a reminder of the young boy’s lunch of two fish and five loaves of bread multiplied by Jesus to feed the large crowd on the Sea of Galilee. If we can multiply our staff, MFI will have an even greater impact for life, liberty, and the family in the Commonwealth! Will you help us grow our staff? Please consider making a donation.

CELEBRATE with MFI! was such a refreshing evening spent with like-minded people gathered to pause and reflect upon the blessings and victories of the last year. We hope you are encouraged to know you are not alone in Massachusetts. MFI stands beside you!