Like many of you, my wife and I are making plans for the 4th of July weekend.  Independence Day is an important holiday that our family celebrates with pride and enthusiasm.  This year we are also celebrating being able to cross state borders without quarantining, enjoying an open public campground, and attending a youth tournament in person.  These are simple things we took for granted just 18 months ago, but I’m hoping we’ll start to feel a bit more like the “land of the free and the home of the brave,” again this summer.

And fortunately, it looks like we’ll get a break from the heat starting on Friday and leading into July 4th.  But Independence Day itself, and the Founding Fathers who made it possible, will still be under fire from some quarters in our society.  The attack on our nation’s history was taken to new levels with the recent “1619 Project,” which is now being used in schools across the country as a curriculum that asks the question, “How does the origin story of the U.S. change if we mark the beginning of U.S. history in 1619 instead of 1776?”  An analysis of the 1619 Project by Heritage found that it is “a political project riddled with factual errors and its theories on capitalism should not be conflated as an accurate historical account.”

In order to counter this trendy distortion our country’s history, last year, President Trump created the 1776 Commission.  The purpose is to “enable a rising generation to understand the history and principles of the founding of the United States in 1776 and to strive to form a more perfect Union.”  The resulting “1776 Report” was a welcome resource to parents and educators who wanted to set the record straight for our children and students.  Unfortunately, on President Biden’s first day in office, the 1776 Report was pulled off the Whitehouse website, and I remember scrambling to make sure I had downloaded it as a PDF.  Fortunately, it was quickly put back online thanks to the Chair of the 1776 Commission, Dr. Larry Arnn.  Dr. 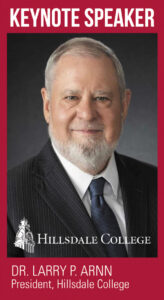 Arnn had the report hosted at the website of Hillsdale College, where he serves as president.  And I’m delighted to say that, on October 15th, MFI will host Dr. Arnn as the guest speaker for our 30th Anniversary Fundraising Banquet!  You can read his bio here.

After having to host a much smaller event last fall, we will be back at the Marriott in Newton this year, and anticipate another sell out crowd.  Mark your calendars and buy your tickets today!

PrevPreviousMFI Lawsuit Against Baker Stops Unfair COVID Restrictions on Churches
NextThey ARE “coming for your children!”Next