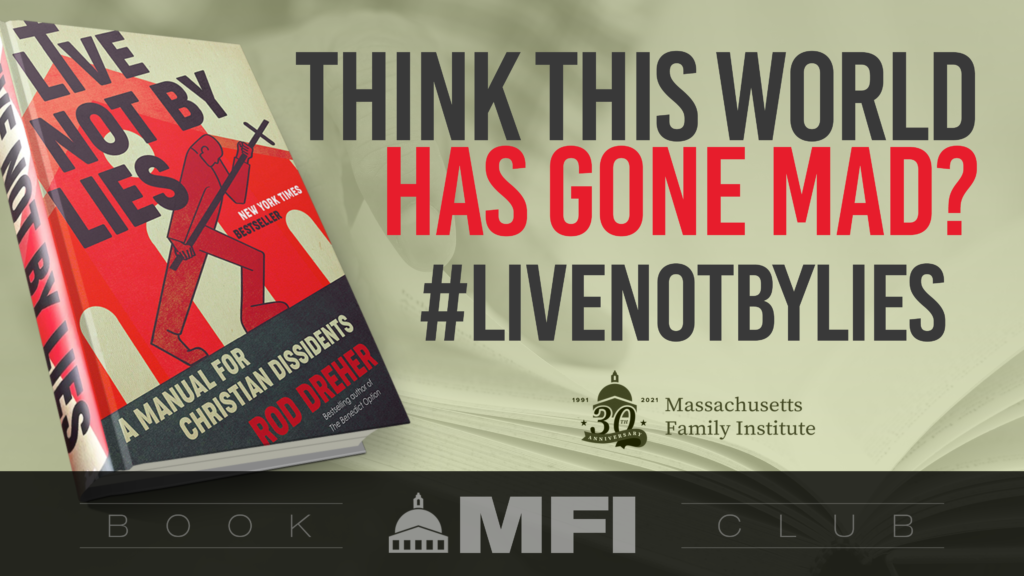 In case you missed it, Tuesday’s second installment of the MFI Book Club on Live Not By Lies is up online now.  I think you’ll especially like hearing from the young people who joined us and shared what their families did to prepare them to not live by lies.

This coming Tuesday, we will have the author of Live Not By Lies on with us, and you won’t want to miss it!  If you haven’t signed up already, it’s not too late.  Just go to mafamily.org/join-the-club and get registered today!

Easter is coming up in just over a week, and we want churches to be as open as possible.  We’ve been hearing that some people are, understandably, confused about how to interpret the current guidelines.  The bottom line is that sanctuaries can be at 50% capacity, while other rooms are typically at the 10 person per 1,000 square foot limit.  The “Workplace Safety Standards for Places of Worship” dictates the following:

“For indoor services, places of worship must monitor member entries and exits and limit occupancy at all times to the greater of the following:

This is admittedly poorly drafted, and one can understand why there has been confusion around the phrase “In any case…” in the third bullet.  However, I communicated last week with a point of contact in the administration, and they confirmed that the limit for sanctuaries is 50% capacity (assuming “they have an occupancy permit on record”), and that the “in any case” language was intended for other rooms in a church building, which is why they give the examples of “a single room, basement.”  Most churches we’ve been interacting with over since last May have been following the 50% capacity rule for their sanctuaries, and they are correct do so.

I wanted to make sure you had this information, especially with Palm Sunday and Easter Sunday coming up, in case it will help facilitate more people being able to worship in person in the short term.  However, I don’t condone the continued suppression of the free exercise and freedom of assembly clauses in our First Amendment.  Just today MFI along with First Liberty sent a demand letter to the city of New Bedford to tell them they must stop the discriminatory attendance limitations they have imposed on New Life South Coast Church. It’s long past time for church leaders and their congregations to have the freedom to decide for themselves how to “stay safe.”  In fact, our family policy counterpart in NH, Cornerstone, just successfully got the 50% capacity limit for their churches entirely lifted! At MFI, we are working with churches and lawyers right now to fight for the same freedoms our Granite State neighbors to the north have.

Are Schools Secretly “Trans-ing” Your Children?

Yes.  There’s not even any question or gray area left at this point.  Specifically, MFI has recently been made aware of a situation in a MA public school where teachers and administrators have actively sought to hide students’ gender “transitions” from their own parents.  And a teacher in that school is being disciplined, NOT because she was promoting transgenderism, but because she is accused of TELLING THE STUDENT’S PARENTS that it was happening.  We’ll have more on this in the weeks to come, but for now I can confirm that the school is justifying their actions on a flawed policy issued by the MA Department of Elementary and Secondary Education.  The policy states:

We’ve been warning parents about this policy language for a while now, but this is the first time we’ve seen it used in this way.  You can see how this is being set up as a “safety” issue for students – that if their parents don’t show enough “acceptance” of their child’s “gender nonconformity,” the student might not be safe at home, so the information must be hidden from the parents.  A similar policy was recently shut down in court in Madison, WI, and we are working to do the same here in MA.

We should note that both of these examples of extraordinary government overreach and violations of our fundamental rights are justified on the grounds of “safety.”  Perhaps we should let individuals and families decide again what is safe for ourselves and our children.  It reminds me of that famous quote from The Lion, Witch and the Wardrobe where Lucy asks if Aslan is safe.  “Safe?” replies Mr. Beaver, “Who said anything about safe? Course he isn’t safe. But he’s good.”  At MFI, you can count on us to continue fighting for the good, regardless of what the elite leftists in this state determine is safe.