Kill The Bill, Not The Baby 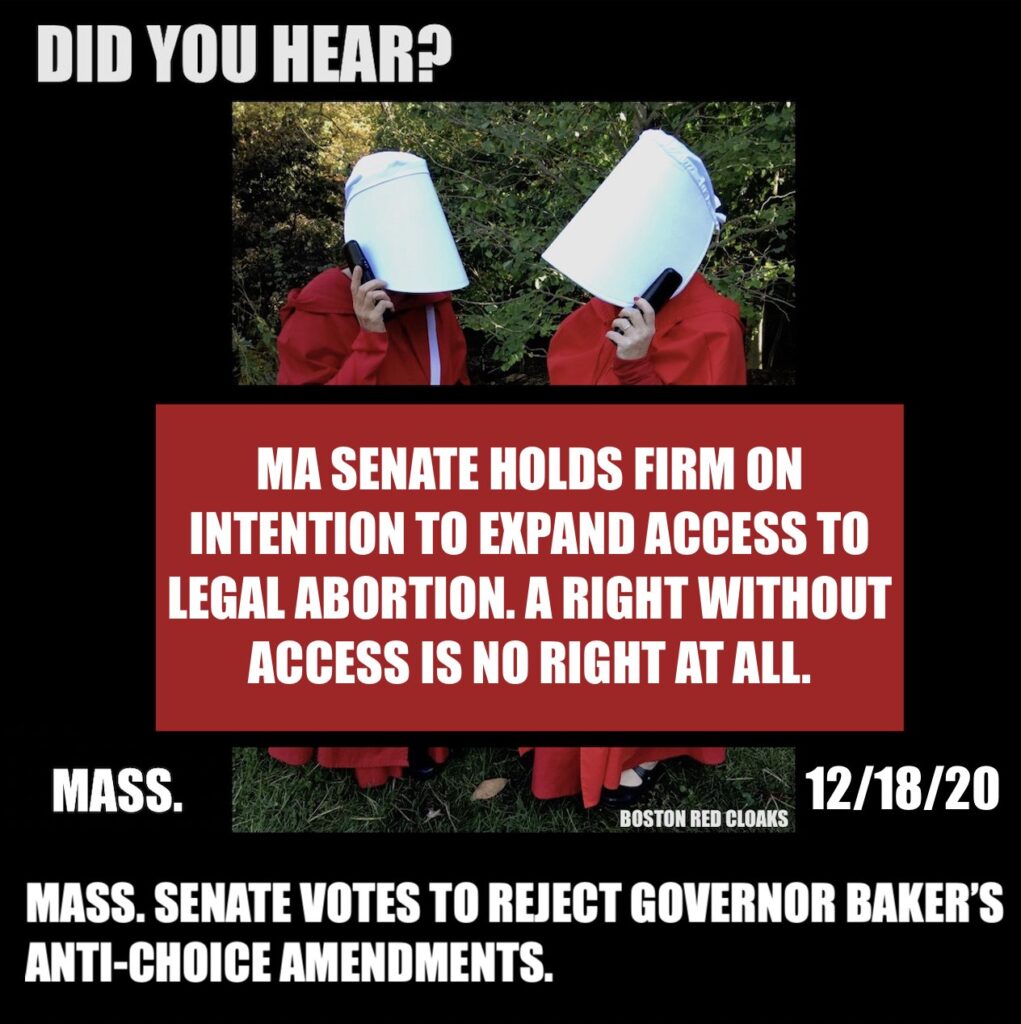 On Friday, the MA State Senate doubled-down on the Infanticide Act, by a vote of 32 to 8. (You can see how your senator voted here).  The MA House had already done the same on Wednesday.  (Vote tallies here).

This means the bill will likely be back on Governor Baker’s desk some time this week.  He will then have the ability to veto it or sign it.  Baker had sent the Infanticide Act back to the legislature on Friday, December 11th with proposed amendments, but both chambers rejected those proposals in their votes last week.

One of the areas on which the legislators were apparently unwilling to compromise is the age at which girls can get abortions without any parental consent.  Current MA law requires girls younger than 18 to get at least one parent’s consent before having an abortion.  The Infanticide Act lowers that age by two years, meaning 16 and 17 year-olds, legal minors, could get abortions without their parents ever even knowing.  Baker, rightfully, rejected this anti-family provision, but pro-abortion lawmakers demanded it be put back in.

For example, Marjorie Decker, a state representative from Cambridge, tweeted out last week, “Getting ready 2 vote down @MassGovernor amendment that will deny 16 year olds the right 2 independently choose an #abortion.  Let’s b clear there is no age on prenatal care 4 young women girls needing #parentalconsent @ProChoiceMass”.

For any sane parent, the prospect of a 16 year-old daughter getting an abortion without her mom or dad ever knowing is horrifying.  For those concerned about sex trafficking, this lowering of the age of consent allows abusers to cover their crimes by taking underage girls to a Planned Parenthood clinic themselves and keeping parents out of the picture.  It’s actually appalling to see that our legislators believe 16 year-olds have a “right 2 independently choose an #abortion.”  I’ve also seen legislators make the argument that since girls can be sexually active at 16 (the age of consent for sex in Massachusetts is 16), that they need the right to get an abortion at that age as well.  That raises a number of red flags with me, as it was only three years ago the MA Senate passed a bill that lowered the age of consent for sex to 13 in some cases.  Assumedly, once 13 year old girls have the “right” to sexual activity they will need the corresponding “right” to abortion free from parental interference.  In fact, an earlier version of the Infanticide Act eliminated ANY minimum age for abortions without parental consent!  So, yes, the slippery slope is very real.  And, in Massachusetts, it’s quite steep and rather icy.

Another argument touted repeatedly by Planned Parenthood is that the Infanticide Act is necessary for racial justice.  They recently claimed that Baker’s rejection of lowering the age of consent for abortions was somehow racist, saying that it will hurt “Black and brown young people. Young LBGTQ+ people. Young immigrants. While we battle the dual public health crises of COVID-19 and racial injustice, our state should be INCREASING access to health care.”

Well, if you want to have a conversation about abortion and racism, it should be noted that black babies in Massachusetts are aborted at FOUR TIMES the rate of white babies.  In addition, even a recent poll by the Boston Globe of all places, recognized that racial minorities are AGAINST lowering the age of abortion without parental consent to 16.  It’s mostly white voters who approve of it.  A majority of Black and Latino respondents opposed the change, the poll found. And Asian-Americans overwhelmingly disapproved of it, 63 percent to 21 percent.”

None of that appears to matter to the abortion extremists on Beacon Hill, or the activists that are relentlessly pushing this bill, even during the week of Christmas.  As I wrote earlier, Governor Baker has the ability this week to veto the bill. Please take a moment out of your busy schedule to email and call him today!