Will your daughter become DCF’s “son?” 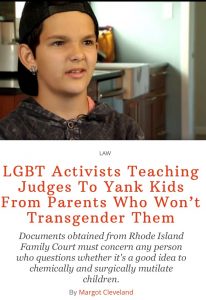 As is becoming increasing clear recently, the sexual revolution is no longer limited to what people do in the “privacy of their own bedroom” or even what is being taught in the classroom. It is now advancing aggressively into our own homes, threatening to separate children from their parents.  The leading edge of this campaign is targeting gender confused children from traditional families. In a groundbreaking article at The Federalist this week, attorney Margot Cleveland describes what she sees as the “transgender activists’ plan: use the government to force parents to affirm a false sex for their child, agree to hormone blockers, and accept a transition to their son or daughter’s preferred gender. If parents refuse? Removal of the child from the family, due to alleged medical neglect.”

She’s right, and this isn’t hypothetical – it’s already happening.  The article quotes Dr. Michelle Cretella, a Rhode Island pediatrician and executive director of the American College of Pediatricians.  Beginning in 2016, Dr. Cretella has already been contacted by seven different families where divorced parents were involved in custody disputes over whether or not to give their children cross-sex hormones.  According to Dr. Cretella,  “In each of the seven cases the guardian ad litems and judges removed the right to medical consent and/or custody from the parent who objected to transition with puberty blockers and hormones.”

A similar case happened here in MA last year, and the mother was interviewed by the New Boston Post.  This single mom from Burlington, MA was taken to court by her ex-husband because she refused to allow their teenage daughter to be injected with testosterone.  A doctor from the notorious Fenway Clinic told the family court judge that “[g]ender-affirming hormones are medically necessary treatment,” and that the daughter “…should have access to a gender-affirming mental health therapist as soon as possible… Youth and adults whose gender transitions are rejected by their families face increased risk of suicide… making gender affirming care inaccessible is incredibly dangerous.”  You can see how this works: a medical “expert” testifies that hormones are “medical necessary” and failure to go along with the child’s gender confusion risks the child committing suicide, so it would be medical neglect or abuse if a parent instead tried to simply help their child feel comfortable in their own body.

Fortunately, that Burlington mom reached out to MFI, and we were able to connect her with a member of Dr. Cretella’s team, a pediatric endocrinologist.  His testimony to the court was a powerful and much-needed dose of reality:

“Cross-sex hormones (testosterone given to females or estrogen given to males) are an even riskier case scenario for the patients involved.  Risk for cancers increase, infertility becomes permanent, cardiovascular disease increases, and in transgendered persons treated longer than 10 years, the suicide rate increases to 19-fold higher than the general population.”

“…the initial feeling of relief obtained with pubertal blockers and cross-sex hormones has been shown to be only temporary, even when society and family is totally supportive.  There is ample proof that hormonal manipulation is physiologically harmful in the short and long term and that the end of the journey for those so treated is disastrous and laced with regret.  While those who recommend hormonal and subsequent surgical treatment may do so out of sincere feelings of compassion for a struggling patient, such treatment plans have no scientific basis.  To the contrary, counseling interventions have proven to eventually resolve gender incongruence in the overwhelming majority of those not treated with hormones or surgery.”

The good news in this particular case is that the judge sided with the mom and did NOT allow for testosterone injections.  There will be more cases to come, however, and the threat to our parental rights and the health of our children is, frankly, ominous.  That is why I’m so glad we have doctors like Michelle Cretella, who are bravely telling the truth and refusing to go along with this unprecedented manipulation of our children’s minds and bodies.  I had the opportunity to interview Dr. Cretella about this issue yesterday for our MFI Podcast.  I encourage you to listen to what she had to say here: 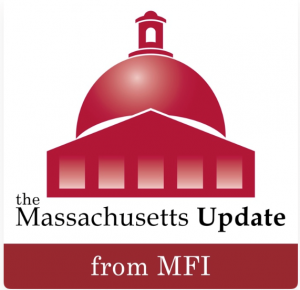 If a child in your family is struggling with gender identity issues and you’re looking for pro-family resources, please email me at andrew@mafamily.org.  My staff and I will do everything we can to help!