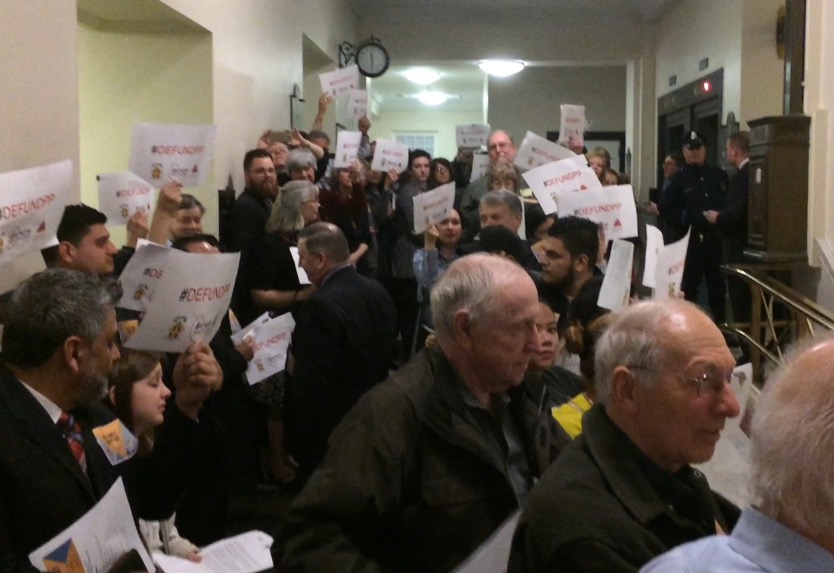 BOSTON – Two hundred pro-life advocates came to Beacon Hill today and sought answers  from Governor Baker about his recent announcement to increase state tax dollars to Planned Parenthood, the nation’s leading abortion provider. With 270 federally qualified health centers in Massachusetts that provide access to health care for women, there is no need for the government to fund an entity like Planned Parenthood that is under congressional and state investigation for criminal activity.

Two hundred people holding signs saying “Defund Planned Parenthood” waited for the governor to meet with them to explain last week’s announcement. The governor refused to come out of his office and so the following letter signed by hundreds of concerned voters was handed to his staff.

As one of your constituents, I have come to the State House today to participate in the Lobby Day for Massachusetts Family Institute, Catholic Citizenship and the Renew Massachusetts Coalition. I would like to express my concern about your recent statements in support of funding for Planned Parenthood.

First, I urge you to speak with Rep. Lyons and to instead support the new bill “An Act relative to state funding of certain nonprofits” (HD 2424). This bill would restrict the public funding of Planned Parenthood and its affiliates. There are now five Planned Parenthood locations in our Commonwealth, but over 270 federally qualified health centers providing care to women without engaging in abortion or embroiled in national investigations over the illegal sale of baby body parts. Please support HD 2424 and disentangle taxpayer funds from Planned Parenthood.

Planned Parenthood has admitted to altering their abortion procedures, thereby endangering the health and safety of women, in order to harvest organs and see a profit. In addition to that horrific practice, Planned Parenthood was also recently implicated in covering up statutory rape, and accepting funds from donors wishing to abort minority children. Why support them over community health centers that engage in none of these practices?

We do not suggest the government take away health care from needy women. We simply ask that the funding be re-directed so our taxes are not used to prop up an organization currently facing enormous legal challenges for ethically questionable and illegal activities. Planned Parenthood also spends a substantial portion of their budget on political activity. In particular, you should advocate for directing funds to community health centers which are focused on medical care, not focused on Planned Parenthoods’ political activity, which consistently promotes legislation and policies harmful to our families.

The CEO of Planned Parenthood of MA, a “non-profit,” makes over $250,000 a year, and the top five salaries of the organization are equally exorbitant. They simply do not need our tax dollars— particularly in an environment when 9C cuts are being issued. Corporate welfare for the abortion industry, which is more concerned with profit than women’s health, should be eliminated, not expanded.

We urge you to reconsider your support for Planned Parenthood. Please call, write, or email me with your thoughts on this matter.”