“Hold-it Healey” is only Trans-tolerant 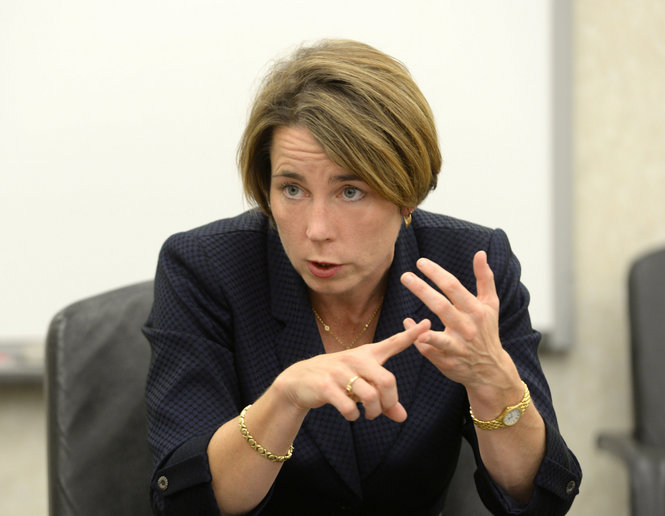 The past two weeks in MA have witnessed the explosion of transgender power and hubris onto the political stage.  First, at a LGBT networking event in Boston, Governor Charlie Baker was booed off the stage by outraged transgender activists demanding that he come out in favor of a bill that would, among other things, allow men to undress in front of women and young girls.  Although he encouraged those in the audience to continue to share their stories and pledged to consider whatever bill the legislature put on his desk, that was not good enough.

The activists said they were tired of waiting and would not be satisfied until the Governor issued them a political blank check by promising to sign a bill that hasn’t even made it out of its legislative committee.  Apparently, any hesitation to fully embrace genderqueer ideology and the myriad of moral, practical and legal implications of the “Bathroom Bill” is unacceptable.

That seems to be the point that Curt Schilling was trying to make on Facebook.  Last week, he reposted a picture of a man dressed up in women’s clothing while lamenting the fact that you now get labeled “a narrow minded, judgmental, unloving, racist bigot who needs to die” if you don’t welcome men like the one pictured into the bathroom with your daughter.  His nearly immediate firing by ESPN would seem to only prove the truth of what he posted.  Whatever else one may think of the man who bled his sock red for Boston in Game Six, he is protective of his daughter.  Last year, he tracked down and publicly exposed cyber-bullies who threatened on social media to sexually assault then seventeen year old Gabby Schilling.

Massachusetts Attorney General Maura Healey, however, just made it clear yesterday that she is not concerned about privacy and safety 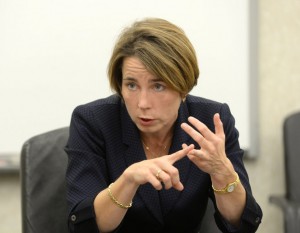 for our daughters when it comes to bathrooms.  Addressing a panel at the State House celebrating the “Transgender Day of Visibility,” Healey told attendees that she was, “particularly troubled” by people who refer to that same bill Governor Baker will not promise to sign as a “Bathroom Bill.”  To those of us, like Curt and myself, who are not on board with men using the ladies’ room, Healey advised, “If you’ve got that much of a problem, hold it.”  Well, wait a minute.  All of five minutes ago, no one would have contested that it was the man with the “gender dysphoria” who had a problem, and if he didn’t feel comfortable using the restroom consistent with his anatomy, then perhaps he should just “hold it” until he got home or had access to a single occupancy facility.  But those of us advocating for the privacy and safety of all women and children in bathrooms were told we were, how did Curt’s post put it, “narrow minded, judgmental, etc…” for suggesting such a thing.  So it’s bigoted to ask .3 percent of the population to “hold it,” but perfectly fine to demand that same course of action for the over 3 million women and girls in Massachusetts?

I am sure the Attorney General sincerely believes that she is tolerant, and deeply feels that way on the inside, but in reality, her statements demonstrate that she is merely hypocritical.  Perhaps she is only “trans-tolerant.”  I’d honestly like to know how she plans to keep my daughters safe if this bill she is supporting is passed.  I hope the Governor will have the good sense, and the courage, to veto it should it come to that.