Last week on NECN, I referred to men’s Olympic decathlon champion Bruce Jenner as, well, a man.  Apparently, I am guilty of having “misgendered” him, because we are all now expected to call him “Caitlyn” and refer to him as a “her.”  Unfortunately, this sort of nonsense cannot be 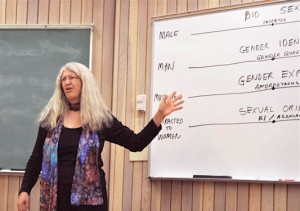 dismissed as the petulant antics of an aging athlete who is just trying to “keep up with the Kardashians.”  This same mentality is being imposed on our children right under our noses.  I spoke with a Massachusetts public school teacher last week who told me about a “safe schools” workshop required for all faculty in which they were lectured on the “gender spectrum” and “using gender inclusive language with students.”

Despite the normalization and celebration of gender confusion in young children, what was truly disturbing from this training is that public school children are now being taught that if they intentionally “misgender” a classmate, that will be seen as a “microaggression.” In other words, if 11-year-old Tommy decides he wants to be identified as “Tammy,” any student who continues to call him “Tommy” or refers to him as “he” or “him” will have committed a “microaggression.”  This will invariably lead to discipline for bullying.  So there you have it – transgender “rights” mean compelled speech for everyone else.  (You can actually be fined up to $250,000 for this in New York City.)

This type of indoctrination may be coming to your school later this month with the LGBT sponsored “Day of Silence,” an event celebrated by thousands of public schools across the country, that has participating students take a “vow of silence” and distribute cards proclaiming they are a part of a “national youth movement bringing attention to the silence faced by lesbian, gay, bisexual and transgender people and their allies.” Some students even wear duct tape over their mouths as part of the protest throughout the school day. The Gay, Lesbian and Straight Education Network (GLSEN) has encouraged students celebrating this event to lobby for legislation supported by homosexual-advocacy groups and to pressure school officials to implement things such as a “queer friendly” prom. During this event, GLSEN also encourages teachers to display homosexual-themed books and other materials about transgender topics in the classroom and to “Discuss Day of Silence with your students.”  With “Gay Straight Alliance” clubs present in over 80% of Massachusetts schools, there is a good chance your local high school will be participating.  You can learn more about this event at our resources for parents page, section 5.

Fortunately, our friends at Focus on the Family and Alliance Defending Freedom have established “The Day of Dialogue,” which is taking place next week, Thursday, April 14th, just before the “Day of Silence.”

Legally, our children have every right to share about their faith and biblical values at school in a way that does not disrupt classroom instruction or the academic environment. If the school allows the Day of Silence to be observed, it must also allow other student-led events like the Day of Dialogue. Encourage your child to organize a Day of Dialogue observance at his or her high school or college.

PrevPreviousSAVE THE DATE: MFI’s 25th Annual Fundraising Banquet
NextYes, there are men who dress like women so they can assault real women in bathrooms and locker roomsNext