Abuse victim speaks out against the Bathroom Bill 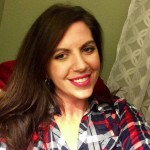