Two months ago, my wife and I went to the hospital for her 18-week ultrasound.  We brought our three children with us, so they could catch their first glimpse of what we learned was their baby sister.  At this stage of development, she was clearly recognizable, even to her five year old sister, as a baby.  The ultrasound showed all the bones, down to the finger tips and toes, and my three oldest children were fascinated by this window into their new 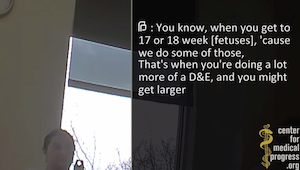 sister’s world.  So you can imagine my reaction when I saw the latest video exposing Planned Parenthood’s sale of infant body parts.  Thursday’s footage showed a Planned Parenthood doctor talking about harvesting body parts from aborted 18-week-olds, and one of her assistants exclaiming, over a glass dish of remains, “another boy!”.

These gruesome videos are exposing the monstrosity of abortion in ways that we have not seen before.  They have gone viral and garnered millions of views, exploding through social media and the blogosphere.  The establishment media has been unable to ignore this movement, even to the point of the normally reclusive president of Planned Parenthood, Cecile Richards, getting cross-examined by George Stephanopoulos on ABC News.  Even here in Massachusetts, where the local Planned Parenthood affiliate is deeply connected with state government and is attempting to dictate Sex Ed in our public schools, the impact of these videos is being felt.  Our own Attorney General, who received a full endorsement last year from Planned Parenthood, was forced to conduct “a thorough review” of the Planned Parenthood League of Massachusetts to ensure they are “compliant with state and federal laws regarding the disposition of fetal tissue.” State Representative and pro-life champion Jim Lyons has been very vocal, saying he is outraged over what has been exposed in the videos.

On the national level, last night’s vote in the Senate was disappointing, but it hopefully sets the stage for a real showdown by the end of September, when the budget is due.  Will the president shut down the entire government in order to maintain the $500 million in federal funding for Planned Parenthood?  Probably.  So we can start praying now for Congress’ resolve.  In the interim, the Center For Medical Progress has approximately eight more videos to release.  (I’ve been told they only get more disturbing, as hard as that is to imagine at this point.)  Despite what appears to be an unlawful restraining order from a judge in San Francisco barring them from any further releases, I pray they find a way to continue exposing Planned Parenthood’s barbarity.  Perhaps we will even see another video later on today. UPDATE: A fifth video was released hours ago. Watch here. 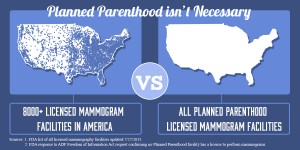 So what can we do?  Our national allies at Alliance Defending Freedom (ADF) have a new micro-site with some excellent resources on Planned Parenthood.  ADF’s infographs not only show how Planned Parenthood does NOT perform mammograms, but also identify the thousands of federally
qualified women’s health clinics and public health centers across the nation that offer all the services Planned Parenthood does, EXCEPT abortion.  There is simply no justification, moral orprogrammatic, for the continued federal funding of these abortion clinics.

Finally, we have already seen several major corporations drop their funding of Planned Parenthood over what’s been brought to light in these videos.  Coca Cola, Ford and Xerox almost immediately renounced any donor relationship with Planned Parenthood.  While we wait for Congress to act federally, we can join thousands of others nationally, calling on Planned Parenthood’s remaining corporate donors to stop sending the profits they earn on our patronage to those who kill, dismember, and sell the unborn.  Please also join me in praying for the doctors involved in this, the women and children who enter their abortuaries, and our nation.