What does the marriage decision mean for us? 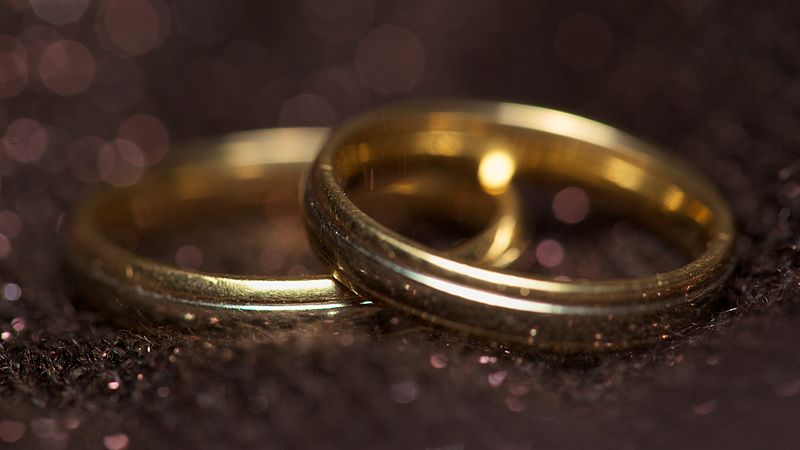 As the leading organization that has worked for over twenty years to strengthen families in the Commonwealth, we at Massachusetts Family Institute find today’s decision by the Supreme Court profoundly disappointing. There is overwhelming evidence that children do best and families thrive when they are sustained by the life-long union of one man and one woman.  The Court’s ruling today may have changed the law, but it has not changed the true meaning of marriage or our commitment to it.

I am also greatly troubled as an attorney, having sworn to uphold and defend the Constitution, at how this unjust decision demeans the impartiality, and even the legitimacy, of our nation’s highest Court.  As Chief Justice Roberts bluntly puts it in his dissent, this newfound “right” to same-sex marriage “has no basis in the Constitution…. [F]or those who believe in a government of laws, not of men, the majority’s ap­proach is deeply disheartening.”

What happens to religious liberty? 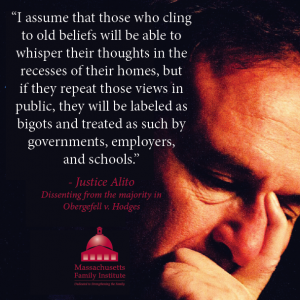 Many people are asking what this decision means, especially for religious liberty.  They are right to be concerned.  In the majority’s 28-page opinion, there is one brief paragraph addressing religious liberty.  They try to reassure us that people of faith may continue to “advocate” and “teach” their views of marriage.  However, the First Amendment guarantees us the right to “free exercise” of religion.  This was intended to be far broader in scope than the mere speech the Court references today.  You can rest assured that Massachusetts Family Institute and our allies across the country will indeed continue to advocate strongly for natural marriage.

But will we be free to live out our faith, to fully exercise that freedom, in our schools and places of work?  Or will our teaching and advocacy be limited to within the four walls of our church and the privacy of our home?  Justice Alito asks the same questions in his dissent, saying: “I assume that those who cling to old beliefs will be able to whisper their thoughts in the recesses of their homes, but if they repeat those views in public, they will be labeled as bigots and treated as such by governments, employers, and schools.”

Here in Massachusetts, we know first-hand that the artificial “right” to same-sex marriage is fundamentally at odds with the constitutional right to religious liberty.  In the decade since marriage was redefined in our Commonwealth, we’ve seen local Christian adoption agencies, private schools, foster families and government employees threatened and harassed because of their religious belief in natural marriage.

This is a question I am often asked, and the answer is not a happy one.  In addition to the erosion of religious liberty, we are also witnessing the full embrace of transgenderism.  This is the “T” in the LGBT litany of special interest groups.  The day before the decision, local news reported on a massive new push to pass a law allowing anatomical men to use the women’s room and vice versa.  The connection is clear, if differentiating between men and women is not necessary in marriage, then it is hardly necessary at all, not even for bathrooms or locker rooms.

What about further down the road?  Over the past several years, as I’ve debated the issue of marriage, I point out that the redefinition of marriage will eventually lead to the legalization of polygamy.  That assertion has routinely been met with scorn and dismissal as a “scare tactic.”  I take scant pleasure in again quoting the Chief Justice’s agreement with my own assessment:

“Indeed, from the standpoint of history and tradi­tion, a leap from
opposite-sex marriage to same-sex mar­riage is much greater than
one from a two-person union to plural unions, which have deep
roots in some cultures around the world. If the majority is willing to
take the big leap, it is hard to see how it can say no to the shorter one.”

What does this mean for pro-family advocates?
The Supreme Court’s decision flagrantly ignores both Constitutional law and the votes of 50 million Americans in a majority of states.  It therefore lacks legal and moral legitimacy.  This is similar to the Court’s attempt to “settle” the contentious issue of abortion in Roe v. Wade.  That attempt stands as a monumental failure today.  After forty years of fighting for the truth and the lives of the unborn, we see that abortion is losing ground.  So today’s decision is a loss, but it is the loss of one battle.  The conflict is far from over. We are not on the “wrong side of history.” History, thousands of years of it in fact, is on the side of natural marriage.  The truth will ultimately prevail.As Winston Churchill said, “This is not the end.  It is not even the beginning of the end.  But it is, perhaps, the end of the beginning.”  We must continue to speak and live out our faith in true marriage in our families, schools, houses of worship and, as risky as it may be, in the public square.  We remain resolute in our confidence that, in time, the social experiment of redefining marriage will collapse under its own weight.  Rest assured that MFI will continue to fight to protect our rights to religious freedom and stay the course in our mission to strengthen the family.