Heather With Two Mommies Speaks Out Against Gay Marriage 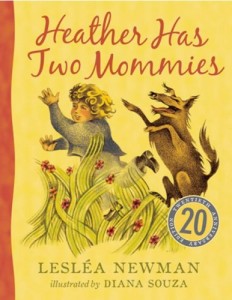 infamous “children’s” book Heather Has Two Mommies, by Lesléa Newman. This purports to be the story of a little girl about to start day care, who is just like any other girl. She has “two legs, two arms, two eyes, two pets, and two mommies.” In an effort to normalize same-sex marriage and parenting, liberal activists such as Newman, who lives in Holyoke, MA with her wife, have been working to infiltrate our schools and public places with their hyper-sexualized propaganda.

What you would not have seen in the Globe is the story of a real girl named Heather who actually has two mothers and no father.  In her article “Dear Gay Community: Your Kids Are Hurting,” Heather Barwick lovingly shares the long-term consequences same-sex parenting had on her. Barwick parallels Newman’s book to her own life– the cozy house in the “open-minded area,” and a community of gay and lesbian friends. Though she loves her family, Barwick shares why she does not support gay marriage.

Initially, Barwick was an advocate for gay-marriage, but as she recognized “the long-term consequences that same-sex parenting had” on her life, her views on the issue changed.

“It’s only now, as I watch my children loving and being loved by their father each day, that I can see the beauty and wisdom in traditional marriage and parenting,” Barwick writes.

Despite her mother’s community telling her that she didn’t need a man in her life, Barwick desperately desired a father figure and says she still grieves over that loss today.

“By and large, the best and most successful family structure is one in which kids are being raised by both their mother and father,” she says in the article. “Gay marriage doesn’t just redefine marriage, but also parenting.”

As we make clear in our recent report on fatherlessness in Massachusetts, children suffer when they do not have both a mother and a father in the home, and as a result, so does our Commonwealth. To download the full report, click here.

Despite the tremendous push to equate same-sex parenting with traditional families consisting of a mother and a father, the witness of children like Heather shows that God’s design for families is still best.