Gordon Under Attack in its Home Town

For months Gordon College has been attacked in the national media and in two nearby cities for its stand on sexual purity, but last night the insult came from the college’s own neighbors. Four of them, anyway. 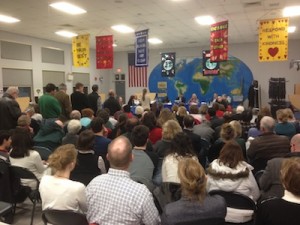 The reason for the change: a handful of students expressed concern to the superintendent that they would not “feel safe” or “comfortable” being on the campus of a college that did not embrace homosexuality as a lifestyle.

The meeting was especially painful for me to witness because it happened in my own hometown, with my own alma mater’s reputation being smeared once again.

My personal feelings aside, the meeting was an incredibly discouraging display of representative government in action.  A standing-room-only crowd of well over 100 people – mostly Gordon supporters – attended.  But despite dozens of heartfelt pleas lasting over 90 minutes, the committee voted to move graduation off of the campus. The decision was by the narrowest of margins (the motion would have failed on a 3-3 tie vote).

From all appearances, it seemed that committee members had made up their minds well in advance of this meeting.  Pleas for unity, tolerance, diversity, religious liberty and common sense fell on maddeningly deaf ears. Even sadder, the statements of the four committee members who voted against Gordon alternated between merely ill-informed and embarrassingly incoherent.

The irony is that in the name of tolerance, the School Committee has made a decision that teaches their students intolerance.  By their treatment of Gordon College, they have shown that if you find anyone’s ideas or beliefs to be disagreeable, you need to immediately cut off ties with that person, and end any relationship. In this case, a 60-year relationship.

Gordon President Michael Lindsay spoke graciously.  He told the committee that the same faith that is now under attack is what commands Gordon’s members to seek the peace and welfare of the cities and towns in which they live.  He reiterated how he had reached out, and was still reaching out, to the high school administration to try to resolve whatever discomfort students allegedly had.  Finally, he said he would keep Gordon’s chapel, the largest space of its kind north of Boston, available for the graduation in case of inclement weather or a change of mind.

The good news is that the people of Hamilton and Wenham demonstrated they are more fair-minded and responsible than some individuals representing them on the School Committee.  We can pray that men and women who truly represent the values of the community will soon replace those who so obviously and condescendingly do not.