Dear Friends of the Family and our Nation, 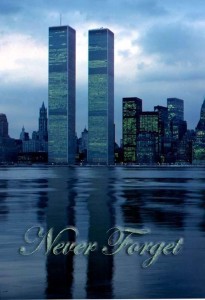 It is hard to realize that it was a decade ago when, on an otherwise routine day, the enemies of our nation perpetrated the worst terror attack in our history. While terror has had a long and deadly history around the globe, America had remained nearly untouched domestically. However, on September 11, 2001, our innocence was lost forever.

In the wake of the terror attacks in New York City, Washington, D.C. and over the skies of Pennsylvania, our nation (and for a time, the whole world) stood together and united in solidarity—to search, to grieve, and eventually, to fight back. It was during this time that Americans adopted a new national anthem, a spontaneous rallying point for a nation in mourning: “God Bless America.”

This song, and those words, became symbolic of a nation pulling together and remaining undaunted in the face of evil. The song was sung at sporting events from coast to coast and the words God Bless America were printed on bumper stickers, t-shirts, and signs from New England to the deep South to the shores of California. We were no longer black or white; Republican or Democrat; Christian, Jew or Muslim. We were all citizens of the United States of America.

As we commemorate the 10-year anniversary of 9/11, let us pause and pray:

The unity that came in the days and weeks following the day the skies went black over New York has faded. The memories of that day are not as vivid as they once were. It is hard not to think that we are being lulled to sleep by our enemies. Perhaps this anniversary and the horrific news footage that will once again be on television screens, will freshen those memories and once more coax a steely resolve in us to do what is necessary to protect our freedom from those who would see it destroyed forever.

Today, the threat of another terrorist attack is still there. But our nation is facing other threats as well, particularly from political ideologies that are counter to those that made America great in the first place. They are counter to our values and to our sensibilities as Americans. The battle for our continued freedom and liberty rages simultaneously with the battle for the soul of our nation.

Let us take a somber moment today to remember September 11, 2001. Let’s mourn the dead, heal the wounded, pray for our enemies and never, ever forget what happened that dark day ten years ago.