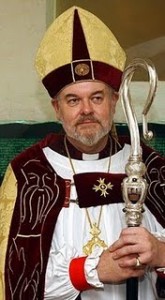 “Every wedding is a royal wedding. Our generous God gave Himself to us.  Love finds its center beyond ourselves.”

An estimated two billion people tuned in last Friday to watch the wedding of Prince William and Kate Middleton, now the Duke and Duchess of Cambridge. That worldwide audience listened to the introduction delivered by Dr. John Hall, Dean of Westminster Abbey:

"Dearly beloved, we are gathered here in the sight of God and in the face of this congregation, to join together this man and this woman in holy matrimony; which is an honorable estate, instituted of God himself, signifying unto us the mystical union that is betwixt Christ and his Church; which holy estate Christ adorned and beautified with his presence, and first miracle that he wrought, in Cana of Galilee, and is commended in Holy Writ to be honorable among all men; …

"First, it was ordained for the increase of mankind according to the will of God, and that children might be brought up in the fear and nurture of the Lord, and to the praise of his holy name.

"Secondly, it was ordained in order that the natural instincts and affections, implanted by God, should be hallowed and directed aright; that those who are called of God to this holy estate, should continue therein in pureness of living.

"Thirdly, it was ordained for the mutual society, help, and comfort, that the one ought to have of the other, both in prosperity and adversity."

The fact that so many people tuned in for this joyous occasion speaks to the deeply ingrained belief that marriage is still the union of one man and one woman, an ideal to be put on a pedestal. The building where it all took place, Westminster Abbey, is a thousand years old and testifies to the endurance of marriage.

Here are some concluding words from Robert Morrison, senior fellow at the Family Research Council:

Marriage is under sustained assault today. So is the British monarchy. So are all the nations that were formed by the English language, laws, and customs. Every day in Britain, Sharia makes dangerous inroads, eroding the Common Law while endangering all liberty. All the while Britain’s government seeks to marginalize Christians.

Today, we heard the Word of God about marriage preached to the Gentiles. The Word does not come back void. Billions of people heard it in the most appealing, most engaging way. Muslims around the world heard about Jesus Christ and did not riot.

Sir Elton was among the invited guests. All were urged to attend to the Word. All had an opportunity to consider its eternal meaning. The nations rise and fall, but His Word will stand forever. Will you defend marriage? I Will.